I am a twenty-eight year old mother and wife of two boys. We have a black lab and live in Southern Ontario. Ever since I was a little girl, I wanted to write books. I would write books, on lined paper with crayon coloured “covers”.

I see you’ve written a lot of series, including COLLIDE, DAMAGED and REBEL. What are your thoughts on writing a book series?

I love reading series, following as characters grow and change. For the Collide series, I wasn’t quite done with Harlow Jones after the first book…or the second book. So I wrote a third, and I feel like that story is definitely one that couldn’t be condensed and told the same way. I encountered the same problem with the Damaged Series; I knew that Everly and Grayson’s story couldn’t be condensed to just one book.

But for the Rebel Series, I did try something different…while it is a series, each book can be read as a standalone as each book focuses on one of the three Miller siblings; Brock, Becky, and Braden. The first book–Rebel Soul, is Brock and Tessa’s story. Rebel Heart is Braden and Elle’s story, and Rebel Song is Travis and Becky’s story. I had a blast writing this series, and I think I’ll do more in the future because it appeals to both series lovers and those who prefer standalones.

What do you owe the real people upon whom you base your characters?

A LOT, I owe them a lot! Everyone around me has influenced or inspired aspects and personality traits in my characters. For example, Bill Armstrong (from the Rebel Series) is a lot like my father–traditional, productive, stubborn, hard-working, a man of few words. Everly Daniels (the Damaged Series) has my naive nature and wears her heart on her sleeve.

What’s the most difficult thing about writing characters from the opposite sex?

Nailing their emotional response to things! I always have to hit up my husband for advice with my male characters.

What would you say are the main advantages and disadvantages of self-publishing against being published or the other way around?

I have tried the hybrid publishing house method, and that didn’t end well. The publishing company went under, and that kind of stress and uncertainty didn’t jive well with me, so I really like the control I have with independant publishing. But I can only really speak from my experiences thus far. I’m not against traditional publishing, or closed off to the idea, and who knows what the future will bring.

Do you let the book stew – leave it for a month and then come back to it to edit?

I’m not really good at letting things stew, so I edit right away. But I usually do several cycles of editing, revising, and tweaking before sending it to the editor and beta team. In between those edits and revisions, I work on other projects.

What is your writing Kryptonite?

Yes, writer’s block is definitely a thing. I like to refer to it as “word constipation”.

Sure do! This is a teaser from my new release, REBEL SONG. Available in KU September 18th! 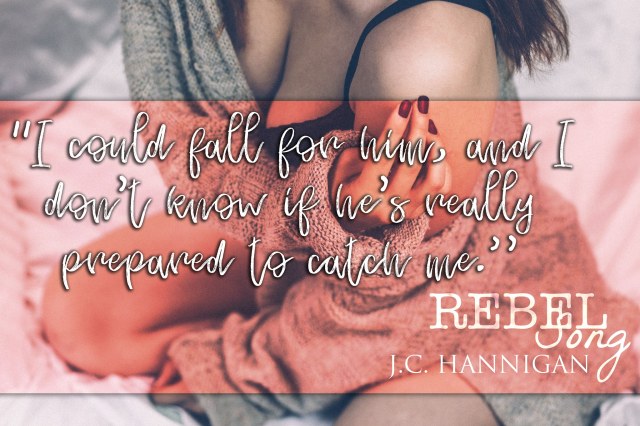 Join me next Thursday when Izzy Syn joins us.  ~Tina