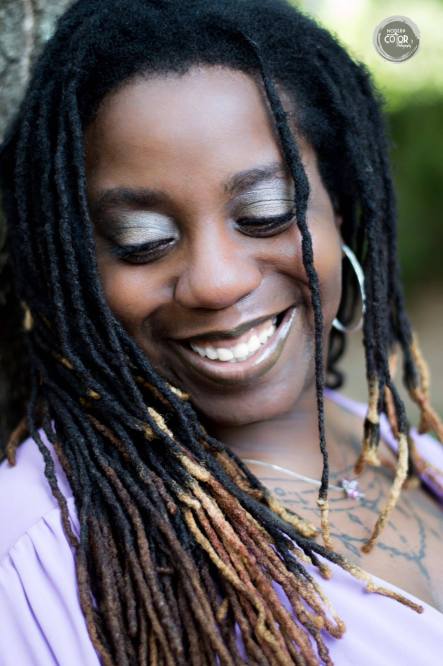 My real name is Ayneka Scott and my Erotica pen name (R. Marlaan Rush) was going to be for a 2nd daughter. I’ve been writing for as long as I can remember. It started off as rewriting my favorite books and movies and then grew into creating my own worlds. I’m a proud mother of a beautiful 8-year-old daughter. My full-time gig is production at a nuclear facility where I also volunteer as a firefighter and medical first responder. I have lived in South Carolina all of my life and with the exception of the seemingly perpetual summers, I love it here.

I schedule a mandatory 1-hour writing block every day. Outside of that, I write and outline on my phone whenever I have free time. I have a writer’s app and MS Word downloaded to my phone.

Yes, very much so. But, I look at it as a challenge and motivation.

Erotica is my chosen genre for my Rush persona because I enjoy sex in all its forms-romantic, smut, some of the taboo things, etc. I’m also intrigued by the power it holds over people. It can make the sanest person a stalker and can even heal a broken person when emotions are involved. It can be a beautifully dangerous thing.

I’m publishing as an Indie author because I like the hard work and dedication that goes into making yourself a success. I want to learn the ins and outs firsthand.

Are you an Introvert or Extravert?

I feel like I’m a combination of both because even though I’m a social butterfly and love the hustle and bustle of people, I crave alone time. I don’t want to bothered; I just want the peace of my own company.

How does this affect your work?

The extrovert is the one that researches and interacts with others to get the materials to create a good read. The introvert, in her quiet downtime, puts the materials together to give the reader the best reading experience possible.

If you want to be successful, come into the industry hungry and stay hungry. Help others if you can. And, when your plate becomes full and is overflowing, grab another plate and share with someone else.

I’m on FB at www.facebook.com/rmarlaan

A Dinner of Sighs
Her nipples ached maddeningly, but thankfully the water she was partially submerged in was warm.

Her lover wasn’t completely cruel. But he was cruel enough to make her his dinner’s centerpiece; here she was, blindfolded so she couldn’t see the people circling her making comments about how lucky he was to have such a beautiful and willing companion, naked as the day she was born on a table so it would look like she was floating in the water.

He had had these cuffs specially made for her, and the matching necklace fit her neck like a thick choker, a perfect complement to her chocolate-milk complexion.

Her crotch being so exposed to strangers she couldn’t see made her want to put her hands between her legs. Even though she was groomed to the gods down there, lotioned and perfumed to the high heavens, the bit of peach fuzz he let her have laid like no one’s business; she didn’t feel pretty down there. Her lips felt too small while her clitoris felt too big, and without the normal bush she sported, her vagina was lighter than the rest of her. She wasn’t pink enough for her liking, either.

“Oh Kallen, your songbird is too perfect,” a woman exclaimed beside her in awe and then nails traced the inside of her arm down to the palm. Too long to be his, and pointy—had to be the woman. The urge to shrink away from her touch was powerful, but she denied it. She must be still.

“What is this beautiful creature’s name?”

“I call her August.”

“August,” the woman repeated, tasting the name. “Scrumptious name for your bird of paradise. I knew she had to be something when you played her songs for us the other day. They were so haunting and sensual—so damned sexy.”

Jealousy flashed, hot and burning, in August’s soul at this confession, but she couldn’t break her character on the table. Sharing Kallen was a common occurrence, but still…. “May I?” The woman asked.

“You may. Any spot you desire.” Something firm and damn near hot was placed on her left hip near her thigh, then on the top of her crotch.

August felt warm wetness drip between her pussy lips and pool in the crease of her thigh and crotch… what the hell was that? Lips first pressed into the crease with the tiniest scratch of teeth, then something flat and warm lapped at the sensitive skin, making August jump with each stroke. She drew her hands into claws, twitching, wanting to pull her left leg up to end the torture.

It stopped briefly, and now the lips and tongue were just below her waistline, where the other piece of food was, kissing and sucking on her flesh. The pleasure was terrible because she couldn’t see who the woman with the expert tongue was!

“That’s far enough, my dear. You can look, but you can’t touch because that part of her is all mine.”

“I’m not sure which was more tender, your little songbird or the roast beef,” the woman mused.

August heard the longing in her voice and smiled to herself…. Kallen may share himself freely, but he drew the line at her and that was fine with August.

“I just wanted to enjoy all of my gravy.”

“Matilda! Kallen! My favorite people in the room!” a masculine voice boomed and grew in volume…. Someone else was approaching to admire her with their hands, but this was at least a man.“Damn, who is this sexy little buffet? I’m starving all over again.”

Kallen put his arm around the brown-eyed blonde’s wide shoulders and swept his other arm over August’s prone body. “Marcus, this is August. You don’t recognize her?”

“Not with her clothes off, that’s for damn sure,” Marcus answered, his eyes roaming the table. He spotted what he wanted and grabbed a small, silver cube. He filled it with warm, oozing chocolate. “My sweet tooth is suddenly screaming.”

“Indulge yourself,” Kallen encouraged, stepping to the side. “As a matter of fact, get another cube. There are two for your tasting pleasure. And, it is shell chocolate.”

Marcus smiled mischievously and placed the cubes upside down on each of August’s erect nipples, grinning at the moan that escaped her pretty red lips. While he waited for the chocolate to harden, he slowly walked around the table, devouring August’s nakedness, turned on by the fact she couldn’t see anything. He stopped at the foot of the table and stared at the top of the V, eyeing her cinnamon-colored pussy lips, her fat, undoubtedly juicy clit (he fancied it was plump and swollen for him), and the white honey pooling at the mouth of her vagina, waiting for a reason to drop into the water below.

So vulnerable…. Marcus touched her ankle and skimmed his fingers along the instep to her pretty red toes, watching her shiver. Kallen watched him intently…. Was he mad at him for making his woman react by touch alone? Marcus hoped so… he really did. “Matilda, dear, would you bring me some of that caramel?”

Matilda snatched up the caramel and handed it to Marcus, winking. “Save a little of her for me,” she whispered just loud enough for him to hear and then turned to Kallen.

“Marcus wasn’t with us when you debuted your songbird, Kallen. How about seducing him with her expressions of lust?” She snaked her arm around his waist and led him to the entertainment center that took up a little over half the wall on the other side of the room, her head against his arm.

His hand dropped to her ass. “We’re somewhat alone now, August,” Marcus murmured, walking back around the table to stare at the shape of her mouth, the sparkles in the red lacquer on her lips catching the light like the diamonds in her cuffs and necklace, her skin flawless in the bright-white light pouring across her body. He grasped the chocolate cube and pulled it gently, watching the nipple and breast stretch like taffy.