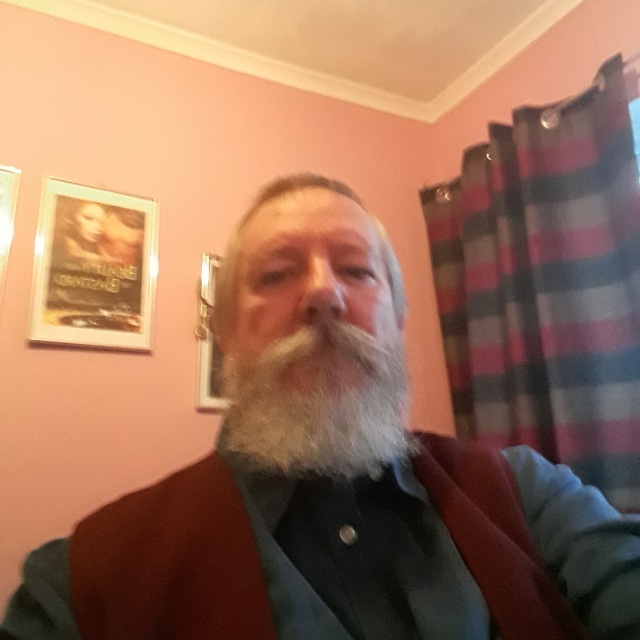 Please welcome my friend David Bridger to The Clog Blog!  David, tell us a little about yourself and your background.
Twenty years in the Royal Navy until I got hurt and then caught a virus in hospital that left me housebound/bedbound with lifelong chronic illness. Cue: my second career as a novelist. Twelve written to date, nine of them still in print, with three more on the way in this next year or two plus my first non-fiction book.
How do you make time to write?
I have all the time in the world (Thanks, Louis) but very limited energy, so managing that to allow my writing is a job in itself.
Do you believe in writer’s block?
For me, thankfully, it hasn’t happened.
Tell us a bit about the genre you write and why you love it.
Science fiction and fantasy of a literary style.
How are you publishing your recent book and why?
Over the years, I’ve done traditional and then self-publishing. Enjoyed the creative freedom of the latter, but eventually had to admit that all the extra work was damaging my health. Fortunately, a friend introduced me to his small independent publisher, who turned out to be a treasure. She and I get on, personally and professionally. She asks no more of me than that I write my books then edit them with her, which is the perfect usage of my available energy. All my available books are now with her house, and I hope that all my future ones will be too.
Are you an Introvert or an Extrovert?  How does this affect your work?
I’m a contemplative. Extrovert in my younger days, growing less so as I age. This might perhaps affect my writing, although I’m probably not the best person to judge that.
What is your favorite motivational phrase?

I trust my intuition.

What advice would you give to aspiring writers?
Keep going.
Where can readers find you on the World Wide Web?
https://www.beatentrackpublishing.com/?ref=DavidBridger
Do you have an excerpt you’d like to share with us?

From my most recently released novel, Wild Times:

Magic is a marriage of hope and rebellion.
It’s everywhere in the world. Always has been. But in most of the world, it’s unknown. People stopped using it, believing in it even, thousands of years ago, and hundreds of years ago, and tens of years ago. It seems that each culture and each generation rejects magic a bit more than the one before. Some cultures more or less than others, but the general trend is to ignore magic and eventually to forget it. In every culture, though, in every generation, there are people who don’t ignore it. Some of them stick around in the normal world, and they are often persecuted because of what they know, what they practise.
But many don’t stick around. They go into the Wild.

Please welcome fellow Liquid Silver Books Author David Bridger to the Clog Blog!  David’s new to the e-publishing scene but I have a feeling he’s going to be wildly successful.  His first story is about Angels and Demons and what great timing.  They are HOT..HOT..HOT right now.

Well enough rambling from me let’s speak with out guest of honor,  So David, what inspired you to write your first book?

The first scene played in my head like the opening scene of a movie, over and over, one night while I was trying to fall asleep. After the third or fourth run through, I surrendered to it. I propped myself up on one elbow and watched the night sky through my bedroom window while focusing on the movie in my head.

The guy commanding my attention was Saul the Bastard, a fallen angel who works as a bounty hunter for powerful urban demon families. He is a tortured and driven individual, intensely private and ruthlessly efficient.

Now I was invested in this story, and I sought a heroine for my hero. She had to be a strong woman to balance his strength of character, and I needed to place her in terrible danger so her vulnerability would help bring his out, eventually.

As well as the characters, which are always the most important thing for me, what inspired me about this story was the film noir mood. It got my full attention that night, and it stayed with me while I write the story.

Q:  How did you come up with the title?

I wrote the story under a different title, and was quite happy to keep it. But my editor said it deserved something stronger and threw out two or three ideas. Beauty and the Bastard was her first suggestion, and I knew immediately that it was perfect.

Q: How long have you been writing?

I was thirteen when my English teacher told me I was born to write. I knew he was correct, but there was another dream I wanted to follow first. I went to sea straight from school and spent twenty years living that dream, and that’s where I learned storytelling.

There’s an oral tradition among sailors, even today when everyone is a technician of some sort or other, and it may surprise some to hear that most sailors’ stories are not about ships or big waves or bad weather, but about people – and especially about memorable characters. Every group of sailors will normally include at least one good storyteller, and every sailor will recall listening to at least one master storyteller on some ship or other. Anyone can tell a story, but only a gifted storyteller who can give it life will find his listeners asking to hear a story again and again.

When I listened to one such master on my first ship tell the same story in two night watches several months apart, I realized on my second hearing that he wasn’t just reciting it. He was living it, and, because he was so skilled, we lived it too. After a sailor has been around for a few years, he’ll recognize lesser versions of master storytellers’ tales circulating among good storytellers, and he’ll hear unsatisfactory versions recited by poor storytellers.

When I came home from sea and started learning how to write, my aim was to marry my natural gift for written communication with the storytelling skills I learned while listening to masters.

Q:  What is your writing process? Do you outline, fly by the seat of your pants or a combination of both? Do you use mood music, candles, no noise, when you write?

Over the years I’ve experimented with different methods, until I found the one that works best for me. I live with the characters in my head for a while, letting them play a scene or two out and exploring the possibilities. By the time I open a new file for them, I have a pretty good idea who they are and where the story will take them. I make a skeleton outline, about one sentence per scene and divided into chapters so I can see the shape of it. Then I start writing. I’ll outline each chapter in a little more depth before I begin it, but normally no more than a paragraph of highlights and lowlights per chapter.

I always find mood music for a story, but I only play it while planning. I like to write in silence.

I’ve also found that I work better with a limited view from my window. Until a year ago, my computer was near a big picture window at the front of the house, which looks over a beautiful wooded valley. I used to find that view very peaceful and believed it helped me concentrate. But since moving into my new study at the back of the house, I’ve found I concentrate much better with only our rear garden to stare out on while I think.

Q:  Is there anything you find particularly challenging in your writing?

I have a muscular condition and my hands can’t type for as long as my brain wants to create. I’ve tried voice recognition software and it works okay. Okay-ish. To be honest, I rarely use it nowadays because nothing is as wonderful as typing in full flow when I’m caught up in the excitement of a story.

Q: As a male romance writer, did you feel you had any particular obstacles to overcome?

No. I haven’t encountered any prejudice inside the industry, and any that comes from outside isn’t worth the hot air it’s carried on.

Q:  What books have most influenced your life most?

The Discovery of Heaven, by Harry Mulisch, is a big book that had a big effect on me. It opened my mind to new subjects, and introduced me to links between subjects familiar to me, and blew me away with the beauty of his writing time after time. It expanded my horizons as a writer.

I Heard the Owl Call My Name, by Margaret Craven, is a novel about a terminally ill young priest who goes to work out his remaining days among the people of an isolated tribe in British Columbia, and this book had the opposite effect on me. As a reader, my horizons shrunk until the world of this tribe filled my mind and emotions, as they fill the priest’s mind and emotions. And by focusing on such a small world, we lived deeper within it. This story left me with an extraordinary peace.

Q:  What are your current projects?

I’m writing another Angels and Demons novella, set in the same world as Beauty and the Bastard but with a new cast of characters.

I have an urban fantasy shifter novel out there on submission.

And a science fiction romance sits quietly on the backburner.

Q:  Where can readers find you on the World Wide Web?

My site is here

and I blog here

Join me on Saturday when David shares an excerpt from Beauty and the Bastard.

Until then be Naughty,

You can buy David’s Book Below