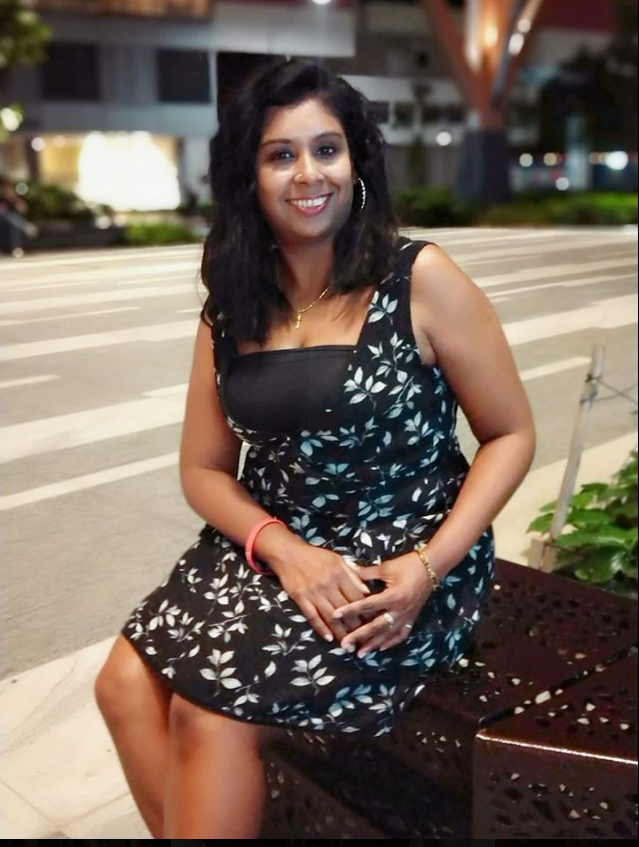 I have always been working in the corporate sector for years and have loved building relationships. I am passionate in working with women and young adults and have been active in helping women build their confidence and rediscovers themselves. On a personal note, I love to read, cook, travel and just enjoy hanging with my friends.

I used to enjoy writing short stories as a teenager but due to work commitments did not pursue writing. During the COVID-19 Circuit Breaker in Singapore, I had more than enough time to dabble in writing.

Yes, I do. I think every writer, will face that some point in their life. It will be a time for them to retreat, re-calibrate and just rush into it again.

I am writing romance stories, but with a little twist. I absolutely love drama, and I enjoy the interactive characters portrayed by people. I wanted to translate that into a book, where people can enjoy the romance not from a reader’s perspective but actually able to go on that journey with the characters in the book.

Indie, as it shortens the whole process.

Extrovert. I think its always a challenge to sit still in a place and work on my book, so I try to give myself time limits, and also breaks in between days so I am not too affected.

Take the tips of established writers, but find your own pace and comfort level. Enjoy the process of writing and not rush to pass a dateline.

Rosella removed her sleeping mask and took a peek when the flight came to a halt. It was a long flight, at least fifteen hours from Rome. She could feel her muscles ache. She couldn’t wait to get out of the plane so she can walk around more freely. The man next to her was unbuckling his seat belt. “We have finally arrived! I am going to head down to the casino first,” he said gleefully. Rosella rolled his eyes at him. She was not able to get a decent hour’s sleep because the man would not stop talking. He kept going on even when she had her headset on pretended to watch a movie. Her ears had ached throughout the journey but thankfully she managed to sneak in a few winks when the man fell asleep.

Rosella has never traveled so far in her entire life. She was both nervous and excited at the same time. When her parents passed away in a car accident, she moved in with her sister, Rina and her husband Hunter. They moved from the city to the small town to take care of Rosella. Rina and Hunter were fifteen years older than her. As they were childless, they doted
on Rosella who was only nine years old at that time. Hunter took on the role of her father and adored her like his own daughter. He always affirmed her so she grew secure in her identity as someone who was cherished. Under their care, she grew into a confident woman of God.

Rosella spent a lot of her time in their local parish church as she grew up. She enjoyed singing to the Lord. Rina will often joke that she started singing even before she was capable to construct full sentences. The local pastor signed her up to be part of their choir team.  During her spare time, she will twirl around the garden with her tambourine, singing hymns unto the Lord. She accepted the Lord as her saviour at the age of sixteen. Hunter and Rina held a massive celebration for her. After the celebrations, Rina came up to her room that night to present her with a beautiful purity ring with the inscription “My beloved is mine and I am His.” Rina had taught Rosella the importance of keeping herself pure for the man the Lord will bring into her life.

She loved the feel of the ring around her finger, as it made her feel valued and important. It has been ten years since Rina gave her that ring, and by the grace of God, she had kept her end of the bargain. She twirled the purity ring around her finger. Her friends had started dating in their teens. But Rosella spent her time teaching the local children in her neighborhood. She was very skilled in arts and was very good at needlework. The Lord had
anointed her with talent in that area and she didn’t want it to go to waste. She wanted to be a good steward of those talents. She also taught the older children in the school to teach and write. When the opportunity to teach at an international school presented itself to her, Rosella was quick to jump at the opportunity.

She shared her desire to work in an international school with Hunter and Rina. She explained how it will give her the advantage to learn how the education system was being structured in a foreign country. She was eager to start her own school in their town one day, and she will benefit from this experience gained. After much persuasion, her guardians relented and gave her their blessings. Rosella had enough savings to help pay for her flight and living expenses.  Hunter offered her some money but she wanted to be independent. After booking her plane ticket with the local agent, Rosella started doing her research on Singapore. The city was vibrant and it featured many interesting sights. She was fascinated with the statue of the merlion and began to list down the names of the attractions that she wanted to see upon her arrival.

The country was also famous for its diverse cuisine. Some of the foods looked too spicy for her taste, but she was ready to begin a new adventure. She will be staying with her friend, Ashley who had moved from Italy a couple of years ago. Her friend was an auditor and she worked in a reputable audit firm in Singapore. The international school was her client and she found out about the job vacancy through them. The school accepted Rosella’s application because of her good credentials and referrals. But she knew in her heart it was the Lord who had opened the door of opportunity for her. She had talked to Him about her dreams of starting her own school one day.

The moment she exited from the plane, Rosella plugged on her earpiece. Music was her life, and it was also her way of finding her escapism. When she was back home, she had loved the old hymns they sang in church. Recently, Ashley had introduced her to some new worship songs that have been gaining popularity. Her friend has been part of the worship team in a church that was based in Singapore. She always sends her new songs for her to listen to. “I am reaching out, I will chase you down. I dare you to believe how much I love you now.” She was humming the lyrics of the song as she headed to collect her luggage. “Jesus! I know you are going to guide me every step of the way,” she prayed under her breath. She placed her luggage on the trolley and headed out the gate.

She pushed the trolley towards the nearest chair and plopped herself on it. She stretched her legs and massaged the back of her neck. She placed her handbag on her lap and started to rustle around for Ashley’s address. She did not want to trouble Ashley to come and pick her up. She was very grateful to her for offering her a place to stay rent-free for the first two months. “You can start paying rent after the third month when you have settled down,” Ashley told her. As she was looking for the address, she noticed a man seated next to her from the corner of her eye. He was talking animatedly on his mobile phone.“Ia adalah masalah kecil. Jangan risau. Nanti, kita cakap, ya.” Rosella surveyed the man, trying to figure out the language he spoke. She knew the people in Singapore spoke different languages like Mandarin, Tamil, or Malay.

From the side view, the man looked very handsome and had a dimple on his left cheek. He was dressed neatly in a blue checkered shirt and black tailored pants. The Patek Philippe watch on his right wrist looked very costly. Rosella had tried to purchase a watch for Hunter on his birthday. It was so expensive that she decided to buy him a wallet instead. She knew that a watch like that can be very expensive. She heaved a sigh, wishing her future husband could be someone well dressed like this man. She stopped herself quickly and knocked herself on her head to come to her senses. What if he was someone’s husband or fiancee? It was really hard to tell these days, and she did not want to be caught up in any drama. She tore her gaze away from him and started rummaging through her handbag again. She was so occupied with her search that she did not realize the man next to her, had left his seat.

“Finally!! Thank you, Jesus!!” She smiled gleefully holding the address victoriously in the air. Rosella checked her wallet to ensure she had enough local currency for a taxi fare. She had two hundred dollars which should be more than enough for her taxi fare and her meals over the next few days. She stood up, slung her handbag across her shoulder, and started to move her trolley. She then noticed the empty seat next to her. Mr. Fancy Pants was nowhere to be found. As she was about to leave, something on the seat of the chair caught her eye. It looked like a card from afar. She looked around and saw no one nearby. She picked up the card. From the back, it looked like a membership card. She flipped it around and saw Driving License spelled out on the top. The name on the card read, Ian Jacobs.

She looked closely at the picture on the card. He looked familiar. “Aayyy” she exclaimed when she realized it was Mr. Fancy Pants who was seated next to her earlier. “Ian!” So, that was his name. She stood up and walked around with the trolley trying to track him down. But he was nowhere to be found. She looked at the clock and realized it was going to be 10 pm soon. It was getting late and Ashley will be waiting up for her. She did not want her to worry.  Without thinking much, she stuffed the license into her handbag. She proceeded to drag her luggage to the assigned taxi stand. Even as she was waiting for her turn, Rosella kept looking around to see if she can spot him. When her taxi arrived, she got in and told the driver to drive her to Bencoolen Condo.